Advances in Lighting Systems Software (Part 3.2 of an 8 Part Series)

Advances in Lighting Systems Software (Part 3.2 of an 8 Part Series)

Welcome back to our Lighting Technologies series! Today, we discuss advances in the software used in lighting systems!

Software developed by researchers at Microsoft and the University of Washington uses a computer’s speakers and microphone to sense arm gestures and other movements of a person’s body. The speakers emit a high-pitched tone between 18 and 22 kilohertz, inaudible to most people, and the microphone picks up sound reflections so the software can analyze them. The researchers showed that a hand wave can be used to scroll through a document or flip through a photo album. The computer can also sense when a user walks away and switch into a low-power state.

Devices that use cameras or accelerometers to sense movements, such as Microsoft’s Kinect and Nintendo’s Wii, demonstrate that gestures can be a useful, powerful, and fun way to control a computer. Gesture control could become more widespread if it could be used without a special camera or hand-held sensor.

The researchers programmed the software to analyze reflected sound for several clues that help it recognize a person’s gestures. It makes use of the Doppler Effect to determine the direction of movement. The researchers also designed a set of hand gestures that could be readily distinguished using those signals, and the software was shown to work reliably on several desktops and laptops with different sound hardware.

The researchers plan to develop more sophisticated mathematical techniques to allow recognition of a wider range of gestures. They also hope to make a version of the software for mobile devices; preliminary tests show that the same approach should work. The accuracy of detection could potentially be improved by making use of the multiple speakers and microphones on some devices to emit and detect more complex tones and reflections.

The University of California, Davis unveiled one of the most advanced outdoor lighting systems in the country, a roughly $1 million network of “smart” lights that talk to each other and adapt to their environment. The $950,000 project is part of the university’s Smart Lighting Initiative, established in 2010 to reduce campus electrical use by 30 million kilowatt hours — or to 60 percent of 2007 levels — by 2015. The new outdoor lights promise to save the university $100,000 a year on electricity, shrink its carbon footprint and making it a safer place after dark. 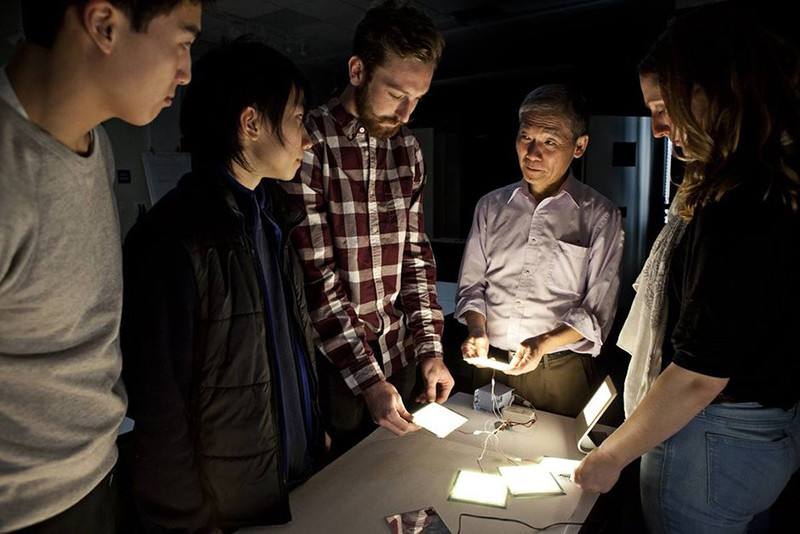 “The face of the campus is changing, and the face of California is changing. Exterior lighting is going to be smart, safe and adaptive,” said Michael Siminovitch, director of the UC Davis California Lighting Technology Center. “What we’ve done at UC Davis is massively replicable, and it will have to be.”

Recognizing that lighting accounts for about a quarter of all electricity use statewide, California is expected to require in 2014 that all new, nonresidential construction have adaptive lighting.

UC Davis unveiled its new outdoor lights on the first day of the California Higher Education Sustainability Conference, a five-day meeting that is bringing together nearly 1,000 people from 70 colleges and universities, mostly in California, to share best practices in sustainable planning.

Adaptive lighting adjusts light levels to suit activity levels, using such tools as occupancy sensors and multilevel lighting. The new UC Davis project wirelessly connects more than 1,400 energy efficient lights along pathways and roadways to a main control area, so that lights that once operated in solitude are now “talking” to each other as part of a seamless web.

The lighting can be scheduled and adjusted for increased or decreased levels of activity, such as during sporting events, or to guide pedestrians along preferred routes. The system senses occupants, whether on foot, bicycle or automobile, predicts their direction of travel, and lights the path ahead. The smart network also senses when areas are vacant, then dims lights enough to save energy and reduce light pollution, without compromising safety.

So far, with the exterior lighting project roughly 80 percent complete, the energy needed to light outside spaces on campus is 58 percent less than it was five years ago, even as the university has added buildings, students, faculty and staff.

When completed, the outdoor lighting network is projected to save more than 1 million kWh of electricity annually – enough to offset the annual greenhouse gas emissions of 135 cars and trucks. Completion is expected within the year.

Far greater savings will be realized when the campus installs adaptive, networked lighting on the inside of campus buildings — along corridors, inside restrooms, offices and hallways — beginning later this year. When both inside and outside lights are in place, UC Davis expects to see $3 million a year in annual electricity savings.

“We used to have a single on/off switch for these lights,” said David Phillips, director of UC Davis Utilities. “Now, we have a coordinated network with programmable, independent, fully dimmable switches. We turn them on, and they all start chattering. They ask, ‘Where am I?’ ‘When should I light up and how much?’ With support from CLTC, UC Davis Design and Construction Management, and our colleagues across the campus, we’ve answered those questions. And we’ll be able to continually update the programming to make improvements over time.”

Other University of California campuses are doing smaller projects with exterior adaptive lighting, including UC Irvine and UC Santa Cruz.

UC Davis Smart Lighting projects are based on innovations developed or refined by the campus’s California Lighting Technology Center and implemented by UC Davis Facilities Management. Many of these technologies were developed in partnership with the California Energy Commission’s Public Interest Energy Research program.

Already widely prevalent to have lighting systems with a strong software connection.

Within the next 5-10 years, all lighting systems may have a plug-n-play LAN based compatibility.

Join us next time in our Lighting Technologies series as we discuss advances in the manufacturing process of lighting design systems!

For more insight into our lighting design philosophy, click HERE.